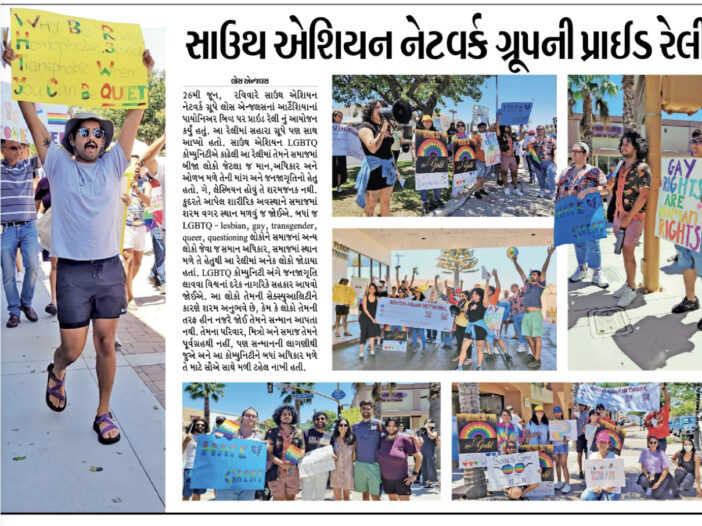 SAN was recently featured in Divyabhaskar, a Gujarati newspaper, for our march in favor of LBGTQ+ South Asian communities in Artesia down Pioneer Boulevard.

Here is a link to the original newspaper in Gujarati with the article found on page 27: https://digital.theindianeye.us/DBNA/070822/.

Keep scrolling to read a translated version of the article:

“On Sunday, June 26, the South Asian Network Group organized a Pride Rally on Artesia’s Pioneer Bee in Los Angeles. The rally was also accompanied by a good group. The South Asian LGBTQ community aimed to raise awareness and demand that they be given the same respect, rights and hobbies as anyone else in the community. May, it is not a shame to be a lesbian. The physical condition given by nature must find a place in society without shame. LGBTQ – lesbian y, transgender, quet, questionmg People have the same rights as other people in the society, there were many people in this rally for the purpose of meeting, every citizen of the world should cooperate to bring awareness about LGBTQ community. These people are ashamed of their sexuality, because people look down on them and do not respect them. His family, friends and society looked at him not out of prejudice, but out of respect and joined hands to ensure that the community had all the rights to join.”