Read this article about countering religious polarization and Hindutva in the United States. Our Executive Director at South Asian Network, Shakeel Syed, makes a statement where he discusses the inclusive community he used to be part of in India, and how that community has changed to today. Make sure to read!

On behalf of the board and staff of South Asian Network serving tens of thousands of South Asian-Angelenos in the Los Angeles County, we demand:

2. The rest of the Councilmembers must denounce their racist colleagues, demand their resignation, and sign an anti-racism pledge.

3. The LA County DA should investigate if the racist LA City Councilmembers had any racist partners in any capacity who are still working at the LA City Council.

5. The LA County Federation of Labor’s membership must vote out Mr Ron Herrera as their President & sign an anti-racism pledge.

We firmly believe that racism has no place and any person or organization allowing racism in rhetoric or in practice has no place in public square. And, as community-rooted organizations serving Angelenos of all backgrounds, we strongly believe in & pledge against racism in all its forms. 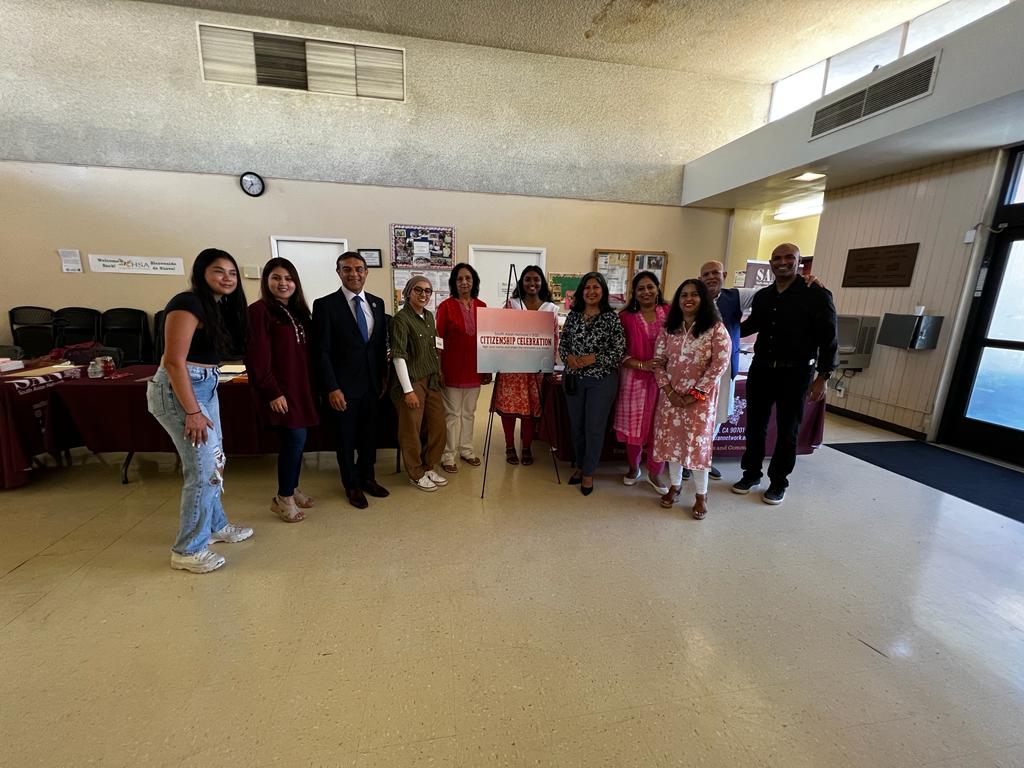 This past Sunday—August 7th—I gave a short speech regarding the importance of civic engagement and the power of American citizenship. Keep scrolling to read the speech:

I would like to stress the importance and significance of your citizenship; its value is not limited to just the certificate in front of you today or the oath you took when you were officially naturalized. It is great to become a citizen, but it is even greater to exercise citizen responsibilities and rights. A whole new world has opened up to you, and I mean that in a figurative and literal sense.

When you first sat down with us at SAN for your citizenship appointment, one of the first questions we asked was: “why do you want to become a citizen?” One of the main answers we received was “to travel more.”I remember just a few years ago—before my parents were citizens—we would take long, 3 leg flights all the way to Chennai from Chicago. Layovers would last hours at a time where we would be cramped in the airport with no fresh air or food. We couldn’t step outside the airport and be able to get back in without an American passport or a travel visa. Now, on our trips over, we are able to step out of the airport in London, Abu Dhabi, and Dubai to see our friends and family after years without having to obtain extra visas. That is a power of American citizenship; it quite literally opens us up to a new world. Unlike green card holders and lawful permanent residents, you also have the ability to travel for more than 6 months at a time without repercussions. With this importance of family, you now also have more power to petition to bring family permanently to this county, as well.

With this luxury, we—as American citizens—also gain access to a new set of responsibilities and powers. As great as you may perceive this country to be, we can all agree that it is not perfect. This is where your new civic abilities become so important. You are now eligible for federal government jobs and can run for public office. You can even volunteer for the city as a poll worker. Even more important than either of those is the ability to vote. Voting is a civic responsibility and right. Voting and elections are what dictate and guide our futures. Each ballot has a say in each of our own futures—including who is making important decisions and what policies become law.

This is even more imperative to recognize here in the state of California. In our state, we don’t just vote for elected officials, we also vote on propositions and ballot initiatives—which include funding issues, public benefits, education policies, taxes, and more. Now, we understand this can feel overwhelming. We do not want this right and responsibility to feel like a burden. So keep your eyes wide open for future SAN resources and feel free to come to us with any questions. Around October, SAN will provide a guide on voting issues. This year is more important than most. 2022 is an election year; the ballot this November will impact the many years to come. It often feels like immigrant voices are overlooked in this nation. The civic abilities provided with citizenship amplifies your voices. Please let the certificate in front of you be a reminder of the greater power you now have.

SAN was recently featured in India West for an event we hosted on June 26. Taking place during Pride Month, this was a march down Pioneer Boulevard in Artesia, aiming to support and uplift South Asian queer individuals.

SAN was recently featured in Divyabhaskar, a Gujarati newspaper, for our march in favor of LBGTQ+ South Asian communities in Artesia down Pioneer Boulevard.

Here is a link to the original newspaper in Gujarati with the article found on page 27: https://digital.theindianeye.us/DBNA/070822/.

Keep scrolling to read a translated version of the article:

“On Sunday, June 26, the South Asian Network Group organized a Pride Rally on Artesia’s Pioneer Bee in Los Angeles. The rally was also accompanied by a good group. The South Asian LGBTQ community aimed to raise awareness and demand that they be given the same respect, rights and hobbies as anyone else in the community. May, it is not a shame to be a lesbian. The physical condition given by nature must find a place in society without shame. LGBTQ – lesbian y, transgender, quet, questionmg People have the same rights as other people in the society, there were many people in this rally for the purpose of meeting, every citizen of the world should cooperate to bring awareness about LGBTQ community. These people are ashamed of their sexuality, because people look down on them and do not respect them. His family, friends and society looked at him not out of prejudice, but out of respect and joined hands to ensure that the community had all the rights to join.”

Shakeel Syed wrote this Op-Ed about Independence Day, the path this nation has been down since our independence, and how independence from the British centuries ago has not meant independence for all.

We know that the lonely Native American female warrior as the statue of freedom atop the Capitol Dome was cast in bronze by a foundry that used enslaved labor. No different is lady “liberty” (in New York), which was also erected by the enslaved.

And, the White House could not be standing shining all these years if not for the sweat of the enslaved blacks.

Without forgetting this sordid past, let’s fast forward.

The claims of the more recent Presidents occupying the White House ranged from: “Government is not the solution to our problem, Government is the problem,” (Ronald Reagan) to “Money is not the only answer, but it makes a difference,” (Barrack Hussein Obama) to the most recent one by the orange hair monster “Make America Great Again.” In these words, there’s very little of greatness and a whole lot of pettiness. Here is why.

Our petty Presidents and politicians of all persuasions continue tounashamedly plot policies that set back the lives of 99% Americans and advance the lives of the 1%.

Our petty Presidents and the Congress always find ways to give more to thewrongly named “Defense Department’s” budget of $800+ billion, while neither are ashamed to trim down the resources to education, healthcareand other social services.

Today’s Supreme Court is like the Torquemada of American law. Tomas de Torquemada, the 15thcentury Dominican friar who became the grand inquisitor of the Spanish Inquisition, who was largely responsible for torturing and the burning of heretics. The modern Tomas de Torquemadais yet to be found with bloody instruments in their hands, but they are the owners of their blood stained pens banishing women of their rights to their bodies.

While the “free” America continues to insist for a safer world for herself, at any cost, it fails to protect her very own.  Every day, armed men and women wearing blue uniforms kill unarmed black and brown men and women.

We claim our nation to be the richest, but it is more debt-ridden and even more debt-dependent than ever before. This indebtedness is what Thomas Jefferson feared the most when he said, “I place economy among the first and most important virtues, and debt as the greatest of dangers to be feared.”

While celebrating this Independence Day let us not forget the immeasurable human pain and poverty that continues to exist amidst us, and let us continue to fight for the oppressed and against the oppressors, in it we shall find our true collective independence and not by waving the cheap Chinese made American flags!

——–
Shakeel Syed is the Executive Director of South Asian Network.