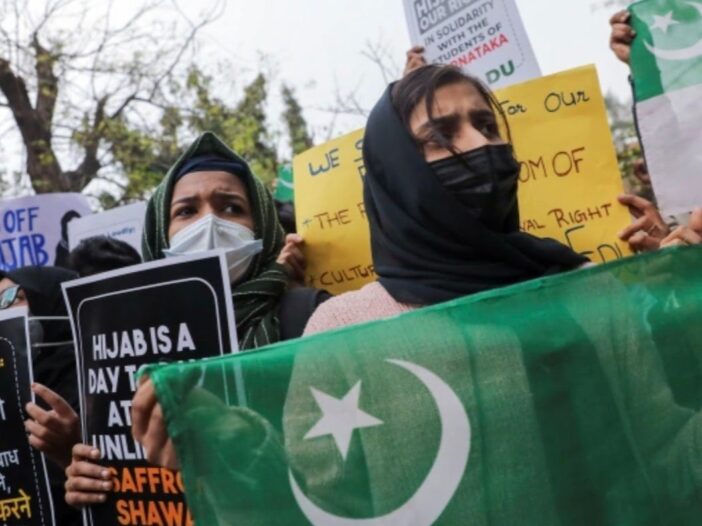 India is seeing rising Islamophobia as the southern state of Karnataka upholds a hijab ban in public educational settings. On February 6, 2022, the state government invoked the state law to back up the hijab ban, making the ban effective until it has been ruled on by a higher court. This has catalyzed the Hindu nationalist citizens in the state to grow violent and harass Muslim students in Karnataka that maintain their religious freedom to wear burqas or hijabs. Due to the Hindu nationalists’ dangerous reaction, Chief Minister Basavaraj Bommai declared a 3-day leave for high schools and colleges. However, both the state and national governments failed to condemn such actions.

The headcovering ban in Karnataka marks the point where India no longer fears appearing intolerant and discriminatory. The BJP and India’s Hindu nationalist government have sent a message they prioritize their Hindu nationalism over the basic safety of their citizens. It’s egregious that Islamophobia in India has progressed to the point that people can threaten the lives of Muslims and expect no consequences in return.

Discrimination against Muslims in education—specifically against Muslim women—has long existed. Athiya, who is currently a student at Manipal University in Karnataka explains, “Once a teacher made a hijab-wearing student sit on the floor in the middle of the class and stripped her hijab off. We faced a lot of humiliation for choosing to wear the hijab. But at that time, they did permit us inside the classroom.” Now, this discrimination is codified and legal. As Athiya alluded to, Muslim girls wearing a hijab or burqa are no longer even allowed in the classroom.

Muslim girls already face hardships in the field of education. According to the 2011 census, only 52% of Indian Muslim women were literate, compared to 70.3% of Indian women overall. Now, Muslim girls who choose to wear head coverings are denied entrance to the school. In some schools, girls were forced to wait outside while in others, they were put in a separate classroom by themselves. Ayesha, a teenage student at the Mahatma Gandhi Memorial College in Udupi, said she was denied the ability to take her chemistry exam. Students fear the absences they are accumulating will result in a failing grade.

Meanwhile, the national government merely stood back, only stepping forward to defend the state. The BJP—Bharatiya Janata Party, leading Congress—defended the hijab ban as they claimed it violated school uniform rules. This new policy is amongst rising Islamophobia in India. Since the election of Prime Minister Narendra Modi in 2014, anti-Muslim violence has been on the rise under this Hindu nationalist government. Hindu extremists have called for the genocide of Muslims. In the state of Uttarakhand, Pooja Shakun Pandey, a senior member of the Hindu Mahasabha party, said, “If 100 of us become soldiers and are prepared to kill 2 million (Muslims), then we will win … protect India, and make it a Hindu nation.” This—clearly violent—threat received no immediate response from the government.

Muslim women continue to be the targets of attacks in India as seen by the open software app “Bulli Bai” where pictures of about a hundred Muslim women have been added where they have been listed for “auction.” Quratulain Rehbar who was interviewing women who fell victim to this app and were scared found that she was eventually listed on the app. “Bulli Bai” is a slur used against Muslim women by Hindu nationalist supporters of Modi. Despite this, the government has failed to take down this app and take steps to keep these women safe.

Just the prior ignorance of the government is a violation of human rights in itself according to the ICCPR. Article 26 of the ICCPR dictates, “All persons are equal before the law and are entitled without any discrimination to the equal protection of the law. In this respect, the law shall prohibit any discrimination and guarantee to all persons equal and effective protection against discrimination on any ground such as…religion.” Ignoring the threats Muslim women face and failing to protect to them is a violation of Article 26. When the Indian government has cracked down on internet and app regulations but ignores such rules when they are meant to protect Muslim women, this is blatant discrimination.

The head covering ban is not just an issue of ignorance but is conscious aggression by the state based on religion, a violation of Article 18 of the ICCPR. Section 18 articulates, “Everyone shall have the right to freedom of…religion. This right shall include freedom to have or to adopt a religion or belief of his choice, and freedom…to manifest his religion or belief in…practice and teaching.” Denying Muslim students the practice of wearing a headcovering is a violation of international law.

South Asian Network does not support or condone any such religious, racial, or ethnic discrimination or hatred. SAN will not exist as bystanders when hateful speech spreading from the BJP and Indian government makes its way into Asian-American spaces in our own communities here in the United States. Global tolerance, support, and ignorance for such discriminatory policies is what has allowed India to go down this Islamaphobic hole for years. When many of our families are still in India, we cannot allow for the hatred they face to go unchallenged—even if we are across the globe—because intolerance in one place bleeds to the next.

Mogul, Rhea, and Swati Gupta. “India’s Hindu Extremists Are Calling for Genocide against Muslims. Why Is Little Being Done to Stop Them?” CNN. Cable News Network, January 14, 2022. https://www.cnn.com/2022/01/14/asia/india-hindu-extremist-groups-intl-hnk-dst/index.html.